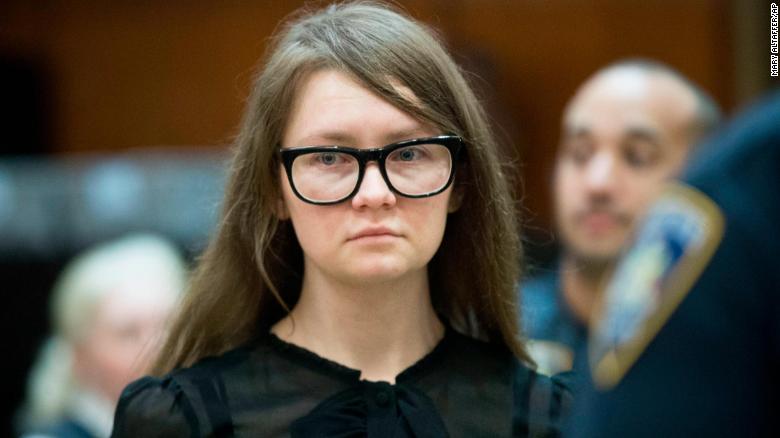 (CNN)A woman was found guilty of stealing more than $200,000 from banks and friends while posing as a German heiress and scamming her way into New York society, the Manhattan District Attorney said.

Anna Sorokin, also known as Anna Delvey, was convicted Thursday of attempted grand larceny, three grand larceny counts and a misdemeanor charge of theft of services, District Attorney Cyrus R. Vance Jr. said. She is expected to be sentenced on May 9.
The 28-year-old managed to get thousands of dollars in bank loans, lived at a luxury Manhattan hotel and traveled on a private plane between November 2016 and August 2017 using bad checks and claiming she wired money for payments, court documents show.
"As proven at trial, Anna Sorokin committed real white-collar felonies over the course of her lengthy masquerade," Vance said in a statement. "I thank the jury for its service in this complex trial, as well as my office's prosecutors and investigators for their meticulous investigation and resolve to ensure that Sorokin faces real justice for her many thefts and lies."
Sorokin was accused of claiming to be a German heiress and attempting to secure a $22 million loan from City National Bank in November 2016, saying she intended to open a private club. She told bank employees her loan would be secured by a foreign bank and used false documents to prove she had multimillion-dollar accounts abroad, an indictment said.
But the bank turned her down because she didn't have enough "cash flow to make loan payments."
About a month later, Sorokin tried to get a similar loan from Fortress Investment Group. When she was asked to make a $100,000 payment to facilitate the loan, she managed to borrow that amount from City National Bank.
She told the bank it "would take her too long to liquidate her assets in Germany and wire the funds to the United States" but that she would wire the money within days, the indictment said. The bank never received those funds.
Sorokin also invited a friend on an all-expenses paid trip to Morocco for six days but her friend ended up paying their $62,000 bill.
They stayed at a luxury villa with a private swimming pool and butler and when it was time to pay, Sorokin's card was declined. She told her friend she would reimburse her and later sent her fake wire confirmations, the indictment said.