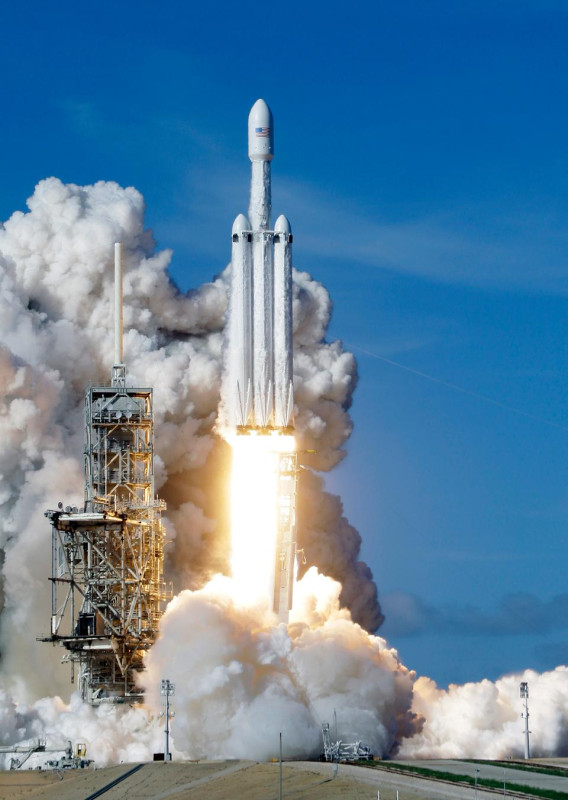 The US Air Force has certified the Falcon Heavy and booked the new rocket for a $130 million satellite launch mission in 2020.

Things may be looking tough for SpaceX founder and CEO Elon Musk over at his electric car company Tesla, but his rocket firm appears to be going from strength to strength.
There was some question over what exactly SpaceX’ larger booster, which features 27 engines for heavy lift-offs, was for – particularly after Musk announced that it wasn’t going to be the rocket that got us to Mars. For that and manned trips to the Moon, SpaceX is working on its charmingly monikered BFR (Big F****** Rocket).
A SpaceX Falcon Heavy rocket lifts off from pad 39A at the Kennedy Space Center in Cape Canaveral, Fla., Tuesday, Feb. 6, 2018. The Falcon Heavy has three first-stage boosters strapped together, with 27 engines in all. (AP Photo/John Raoux)
That left the Falcon Heavy as a bit of an in-betweener. It has secured contracts already, including satellite launch missions for ViaSat, Inmarsat and Arabsat. But NASA doesn’t look like a likely customer for this one since it’s building its own heavy rocket, the Space Launch System. SLS will probably cost about seven times more than the Falcon Heavy per launch, but that doesn’t seem to be deterring NASA from wanting its own booster for deep space exploration.
However, the Air Force contract is a big winner, especially considering SpaceX went head-to-head with United Launch Alliance, the traditional joint venture of Lockheed Martin Space Systems and Boeing Defense, Space & Security, and has only performed one Falcon Heavy test flight.
But the USAF appears to have deemed that one successful test as enough, perhaps because the engines are the same as those used on the Falcon 9, which has had over 50 successful space flights.
The $130m contract is to launch the Air Force Space Command-52 satellite into its intended orbit. The contract “will include launch vehicle production and mission, as well as integration, launch operations and spaceflight worthiness activities,” according to the US Department of Defense. The satellite is a classified one, so we’ve no idea what it’s for, but the Air Force wants it in space by September 2020.
NASA may yet change its mind about the Falcon Heavy, with military certification and a few successful launches at that cheaper price tag under its belt, particularly as budget for the space agency remains tight.
The Falcon Heavy is “the most powerful operational rocket in the world by a factor of two”, according to SpaceX. It’s capable of lifting nearly 64 metric tons into space, which is larger than the mass of a 737 jetliner full of happy holidaymakers, crew, luggage and fuel.
The first stage of the rocket features three Falcon 9 engine cores, with 9 engines each, adding up to 27 Merlin engines generating more than five million pounds of thrust. The only rocket that’s ever been able to launch more into space is the Saturn V moon rocket.
Tags: вы всё врёти!, летаем дальше, отака хуйня малята, сырье и кадры
Subscribe